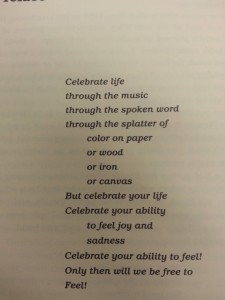 Last week I had the opportunity to sit in on the first squad meeting for the Glace Bay team. The meeting started off with a little small talk. Everyone seemed a little shy, which is to be expected when you are in a room full of people you don’t know for the first time. We all began to warm up after we filled up on some pizza.

Everyone grabbed a seat and started to settle in as we were beginning the group’s first workshop. As an observer, I (much like the youth in our group) was unaware how the workshop would progress. There was a round table in the middle of the seats, and in the middle of that table were several pictures of Industrial Glace Bay. There were a number of pictures of the Number 26 mine and a few of working men down in the mines. Being from Cape Breton and as a lover of Cape Breton Labour stories, I have seen many pictures like these. In fact, when I hear stories of Glace Bay, I visualize these images as opposed to picturing contemporary Glace Bay.  It might be because prior to that night, I spent most of my life trying to see how the past effects the present; I might have spent more time looking back than I have looking toward the future.  And I like to thank this group for helping me see that!

While the group was looking through these pictures, the facilitator asked if the pictures represented the youths’ Glace Bay. For a moment everyone was quiet. I wasn’t sure if this was because they didn’t understand the question or because no one has ever asked them that before. The facilitator continued, noting that she was not from around here, and that the pictures reflected what she has been told that Glace Bay is all about. She asked again if the pictures showed what their Glace Bay looks like.

Within seconds, it was pretty clear that they were not quiet because they did not know the answer. Consensus filled the room: Glace Bay to them is no longer about the Industrial era, but it is now about a post-industrial struggle.  They implied that their Glace Bay is about every day survival, but they also talked about loving life and the fun they have with their friends. I found it overwhelming and humbling to see how much pride and love each group member had for their home town.

I am not sure I would have been able to compile all the information they did when I was their age. I wonder if it was because I have bought into a common rumor, that “youth today, don’t see anything but their cell phones, internet and video games.” These youth see A LOT more than we give them credit for, and if they do spend most of their time looking at their cells phone, maybe it is because others don’t really give them much of a chance to show what the can do (my self-included).

Note: The photo above is a poem written by Afeni Shakur. The poem is dedicated to her son  Tupac Amar Shakur. Afeni stated that Tupac, ” sought to interpret his world using all the visual and linguistic tools available to him.” This poem embodies the ability to feel free when expressing ones own self. I found  that to be very fitting, and empowering!